CMA conducted a social media analysis of NJSNA’s social presence to develop an organic strategy that would reach the right audience at the right time while maximizing budget and increasing followers to ultimately reverse a decades-old membership decline. 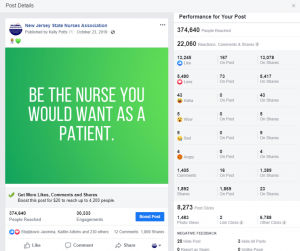 By analyzing past posts and analytics, interactions with followers and prior social media campaigns, CMA identified, curated and shared content—inspirational quotes, trending issues and “hot topics” in the news—that resonated with NJSNA’s audience, generating a spike in engagement. CMA launched micro-campaigns on social media to support large-scale public relations campaigns in order to support its top member benefit, which is advocacy.

CMA also incorporated consumer psychology into the social media campaign, using colors, patterns and fonts that would appeal to the target audience and enhance NJSNA’s reach on Twitter and Facebook.

Although faced with a decrease in budget compared to the prior year, NJSNA had an ambitious goal of increasing followers by 1,000. Even with half as many weekly posts as the previous year, CMA increased key metrics throughout 2019, including follower growth and post analytics.

Coupled with lead generation efforts like targeted hashtags and engagement strategies, CMA surpassed 2018 totals—boosting impressions by 123%, engagement by 111% and clicks by 21%. Social media channels referred 229 nurses to NJSNA.org. The follower count increased by 18%, exceeding the goal of 1,000 new followers.

NJSNA’s membership grew by 783, or 18 percent. The membership increase and additional non-dues revenue yielded $286,972.50 in new revenue for the nurses association. From a return-on-investment perspective, NJSNA yielded a 734% return on their marketing investment with CMA.